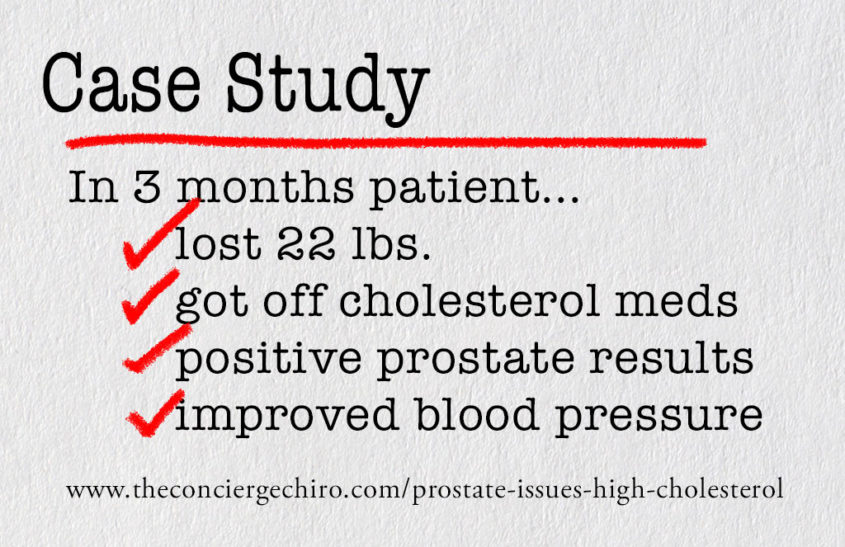 Despite taking two blood pressure medications and a statin for his cholesterol, this patient's numbers were still less than ideal.

The 55-year old patient presented with concerns about recent prostate specific antigen test results and a difficulty losing weight. He stated he had high blood pressure which was under control with the help of two medications and high cholesterol for which he also took a drug. A PSA test at his doctor's office in mid-April came back at 4.5 and a follow-up in May was at 3 (the clinical range for a PSA marker is 0-4.0). He had some concerns about the possibility of prostate cancer. He also claimed he felt overweight by about 45 lbs and had been trying to lose weight for about 18 months. So far, he was down only 6 lbs and very frustrated. He exercised 5 times per week and cut red meat from his diet. At the time of the initial visit, he weighed 249 lbs at 5'10" and his blood pressure was 138/86 with medications. I checked his ankles for swelling and noted that the pitting was +2 on both sides.

The most obvious critical marker in these tests is the Creatine Kinase at 1,722, more than 12 times higher than the healthy limit. An EKG is needed to rule out heart problems. Other areas of concern are the high cholesterol, low protein, high liver markers (AST, ALT), low thyroid, low vitamin D and high PSA.

Many toxins emerged in the tissue mineral analysis including arsenic, lead, mercury, and uranium. These likely caused an imbalance among essential elements such as calcium and magnesium

Creatine Kinase (CK) is a marker for cardiac or skeletal muscle breakdown. After speaking with the patient, he explained that he worked out shortly before having his blood drawn which was likely the reason for the extremely elevated Creatine Kinase (CK). However, to be on the safe side, we preformed a EKG to rule out heart damage and two tests confirmed normal results. The high LDH (cell breakdown) and CRP (inflammatory marker) may have also been affected by his workout.

Even on medication for cholesterol, the patient's Triglycerides, LDL cholesterol and VLDL cholesterol were high. This may be a result of high toxin levels in his body as seen in the hair. Cholesterol levels will rise to protect the body when toxins are present. We also see elevated AST and ALT (liver markers) which are probably due to processing his medications. The liver is very important to the immune system, digestion, and glucose regulation and could be causing his elevated Hemoglobin A1C, low protein and low globulin (a type of protein important for a strong immune system). Other factors could be a low protein/high carbohydrate diet, edema or malabsorption. The patient should use digestive enzymes with each meal and make sure that 25% of his plate is a good quality protein like seeds, nuts, beans, sprouts, eggs, fish, or chicken. The middle low thyroid also shows a slow metabolism.

His PSA was 4.5. There are many reasons it could be elevated including benign prostate enlargement, inflammation, or his age. The use of statins (cholesterol lowering drugs) can also increase his risk of prostate cancer. This number is something to watch, however, it is only slightly elevated now and has remained fairly stable since May. Diet modifications, weight loss and supplements to reduce toxins in his body and rebuild low levels of essential elements may help lower this number.

In just 3 months after modifying his diet and taking supplements targeted at his deficiencies, the patient is feeling great. He has lost 22 lbs and is completely off his cholesterol medications.

Several things improved including the PSA, vitamin D levels, AST & ALT, Hemoglobin A1C and most importantly the CK which dropped from 1,722 to a healthy 98. Still on his BP medications, his blood pressure has also improved sitting at 117/76. His triglycerides are now a little low. This may be attributed to the recent weight loss.

The main thing on this blood test is the low protein which can cause many of the other values that are out of balance including the thyroid. Poor digestion can cause low protein. His PSA number is staying fairly steady and is slightly lower. It is not a cause for worry at this time.

Your body regenerates itself about every 7 years through a combination of cell destruction and rebuilding processes. The Creatine Kinase is a good indicator of how much cell destruction/muscle breakdown is going on in your body. High levels can be caused by a recent workout, injury or stress on the heart or brain while low levels are often found in sedentary people who get very little to no exercise. Your CRP indicates tissue injury, inflammation, and infections. Recent studies have also found a link between this number and the risk for heart attacks, heart disease or strokes. Finally LDH, an enzyme present in every cell in your body, is another indicator of overall cell destruction. It doesn't tell you where the destruction is or what is causing it, but will tell you that cells are being damaged.

When you workout, it is important to give your body the nutrition it needs to rebuild muscle and tissue breakdown. Good quality proteins and vegetable carbohydrates are essential to this process. If you do not have a good diet it will also be very difficult to lose weight, and it will not matter how much you work out.

This patient was on two medications for blood pressure and one for high cholesterol, yet his doctors had failed to determine a reason for these increased numbers. Looking at his test results, the high toxins like lead and mercury likely were one source of these problems and increase tissue breakdown may also be linked to his high cholesterol which will rise to protect the heart. Once his diet improved and more toxins were cleared from his body, his cholesterol values returned to healthy levels - without the help of medication.

And that medication may have also been causing other problems. A study published in the American Journal of Epidemiology found that the use of the statins (cholesterol lowering drugs) increased an obese man's risk of developing prostate cancer by 50% and continued use for 5+ years increased that risk to 80%. The patient PSA marker is currently stable, but the higher number may be linked to his medication stage.

This case showcases a real patient's results using the Science Based NutritionTM system of analysis, which takes into account hundreds of numeric data and their roles, combinations and inter-relationships as related to disease diagnosis. This patient is/was under the care of Dr. Van D. Merkle, creator and found of Science Based NutritionTM, Inc. and is meant to serve as an example of results achieved using the Science Based NutritionTM report. Joshua Ledbetter, D.C. is a provider of Science Based NutritonTM. Results will vary based on patient ability/willingness to flow the recommended nutritional protocols, among many other factors. Any suggested national advice or dietary advice is not intended as a primary treatment and/or therapy for any disease or particular bodily symptom. Nutritional counseling, vitamin recommendations, nutritional advice, and the adjunctive schedule of nutrition is provided solely to upgrade the quality of food in the patient's diet in order to supply good nutrition supporting the physiological and biomechanical process of the human body. 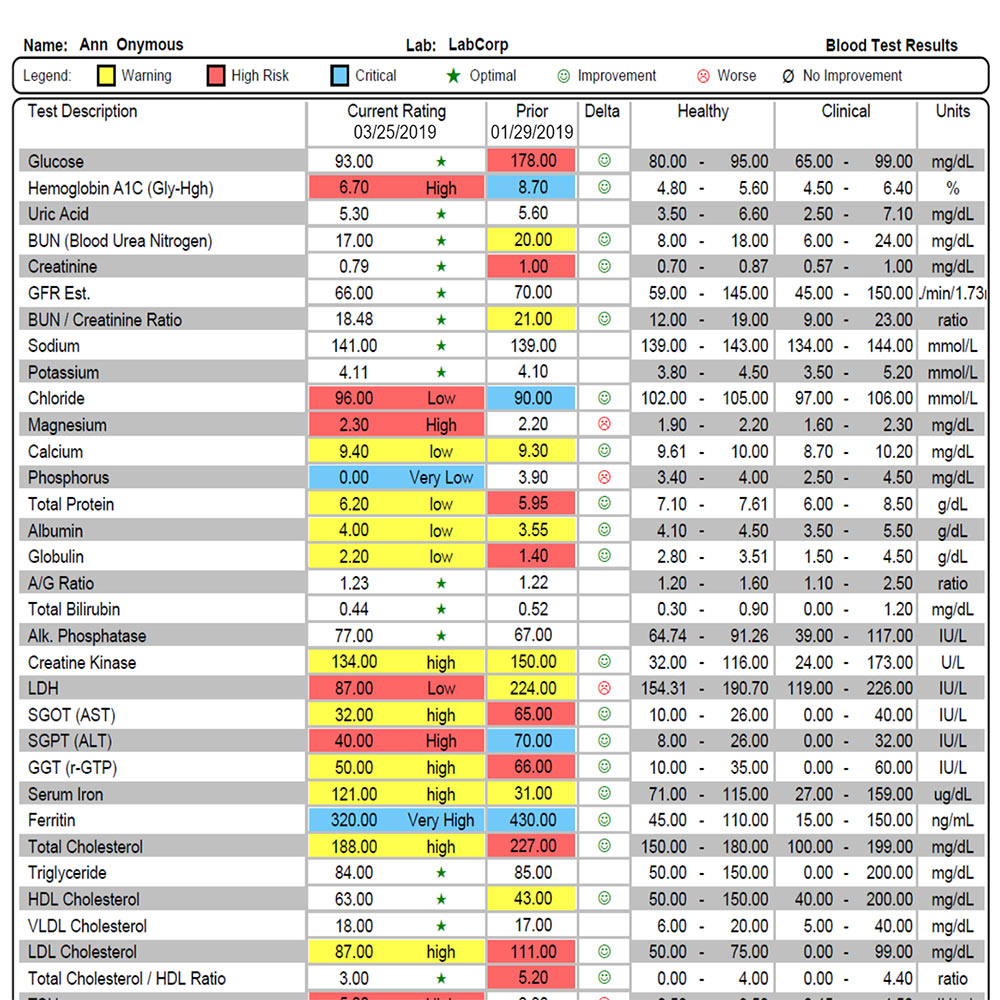 With an easy-to-read nutritional analysis based on your blood, hair, and urine samples, Dr. Josh will be able to provide you with the best quality whole food supplements and personalized diet plan to optimize your body's ability to fight disease and function at 100%.
Learn more